Encinitas is one of San Diego County’s great beach towns, no question—plus an absolutely premier surfing destination. This North County seaside gem—not far from Downtown San Diego, but worlds away in vibe—offers 45 sumptuous acres of sandy beaches strung between the Batiquitos and San Elijo lagoons.

Cliffs and bluffs looming over golden sands, dreamy Pacific Ocean sunsets, picture-perfect surf breaks, and winter tide pools set the scene for a perfect day out no matter your interest. But, where should you go?

In this article, we’ll break down the best Encinitas beaches, which happen to include the very best beaches in the San Diego area. We’ll kick-off, though, with some basic nuts and bolts of visiting them.

Getting Here & Getting Around

Only 25 miles north of San Diego, Encinitas couldn’t be more convenient to reach. Take the Encinitas Boulevard exit off the I-5 freeway and head west to the central beachfront (Moonlight Beach).

Encinitas’s beachfront is managed by the city’s Parks, Recreation, and Cultural Arts Department. That includes those strands, such as Moonlight and Beacon’s, which are technically part of the California State Parks system.

If you want to bring Fido surfside, Encinitas isn’t the place. No dogs are allowed on the city’s beaches—and no portable grills, glass, booze, or cigarettes.

Designated parking for the Encinitas beaches that have it is available from 5 a.m till 10 p.m. The beaches themselves are more open than not, closed only between 2 a.m. and 4 a.m. Lifeguards staff the beach towers from 10 a.m. to 6 p.m. from late June through Labor Day at the majority of the beaches. They provide generally year-round monitoring at Moonlight Beach and, on off-season weekends and holidays, at Swami’s Beach.

Each of the six main Encinitas beach zones offers its own charms, and true sand-and-surf devotees will want to visit them all. (It’s possible, as I’ll note, to hit up several beaches in one go with a pleasant stroll at low to moderate tide.) I’ve roughly ranked the beaches in the following list, mainly according to the variety or quality of their attractions.

Moonlight State Beach is the best-known of the Encinitas beaches. It also ranks among the most popular beaches for families in San Diego County and kid-friendly California beaches.

This is mostly due to its long list of amenities which also make Moonlight Beach a top pick of North County hotel concierge desks, even if it’s not the closest beach.

You’ll find a grassy green space with a playground and picnic facilities adjacent to the sand at this family destination among Encinitas beaches. Moonlight’s Marine Safety Center provides lifeguarding year-round.

Moonlight Beach can be busy on an average summer day. The nearness of D Street and Stonesteps beaches gives you some backup options if Moonlight’s too thronged. Winter months are less crowded and you’ll still get to enjoy the San Diego area’s renowned year-round balmy weather.

You’ll easily find Moonlight Beach at the road’s end off Encinitas Boulevard, which turns into B Street west of Highway 101 and leads right to the beachfront.

The origin of Moonlight’s romance-tinged name? Early Encinitas residents favored this stretch of seashore for nighttime picnics. Rest assured it’s just as rewarding of a hangout during the daytime!

Moonlight Beach delivers the classic, across-the-board Encinitas beach experience, with plenty to do for young and old alike.

Moonlight’s a well-developed beach park with just about the whole nine yards when it comes to amenities.

A fee parking lot off C Street serves Moonlight Beach, with ADA parking spaces fronting B Street. If you want to avoid shelling out for a parking space, you can try your luck finding free street parking in the vicinity.

A little south down the Encinitas coastline, tucked where it swings east-southeast, the famous surfing mecca of Swami’s Beach also ranks among Greater San Diego’s most legendary beaches.

That’s mostly on account of its point break, one of the region’s best. It’s also got some notable history, as reflected in the name. Its blufftop is marked by the Encinitas Gardens of Self-Realization Fellowship Hermitage, established in the late 1930s by the influential Indian spiritual teacher Swami Paramahansa Yogananda. He wrote his seminal Autobiography of a Yogi here.

Swami’s Beach (sometimes called Swami’s Surf Beach or Swami’s Reef) also happens to be beautiful. Its headland-cupped setting fosters a secluded despite the spot’s well-deserved popularity. There’s plenty to appreciate here even if you’re not a wave-rider yourself.

Besides the splendid scenery and sands, Swami’s provides wonderful opportunities to observe Southern Californian sea life, and to “beach-hop” your way on foot up and down the shore.

At low tide, some of San Diego’s best tide pools are exposed at Swami’s Beach. The readily accessible intertidal treasure troves with sea anemones, starfish, sculpins, crabs, sea hares, and other critters go on display during the winter months.

Offshore, the protected waters of Swami’s State Marine Conservation Area overlie kelp forests and reef communities tempting SCUBA aficionados and strong snorkelers. Keep an eye peeled for California spiny lobsters, kelp bass, and other organisms. It’s also not unheard of to spot the shiny backs and slashing dorsal fins of dolphins from this vantage—always a thrill!

Swami’s can also be a fine place to take out a kayak or stand-up paddleboard. And in winter especially, reliable entertainment is provided from blufftop (host to Swami’s Seaside Park) or beachfront, watching ace surfers work the famous break when the swell’s just right.

Whether you have any first hand surfboard experience yourself, it’s invariably thrilling to have front-row seats to some of Greater San Diego’s preeminent surfing. That’s just what Swami’s serves up to landbound visitors.

Not really a prime swimming beach, Swami’s still has much to offer.

There’s free parking at the blufftop park. It’s a small lot, though, and expect it to be full on weekends (and whenever the surf’s up). If it is, you can also park along the highway south of the Swami’s access road and walk in.

Easily reached off of the I-5 freeway or North Coast Highway 101 via Leucadia Boulevard, it’s a nice spot to stroll and sunbathe, and another magnet for surfers.

A switchbacking trail descends the erosion-prone slope to reach Beacon’s Beach, which has a lifeguard tower only in the summer months (Memorial Day through Labor Day).

As elsewhere along this steep-cliff-edged shoreline, high tides can mostly or completely overwash Beacon’s, so time your visit accordingly and stay aware of conditions. Otherwise, it’s possible to walk south to reach Stone Steps Beach and then Moonlight Beach, or mosey north to Grandview.

There are none other than the seasonal lifeguard tower. You’ll find public restrooms south at Moonlight Beach, or to the north, beyond Grandview, at Carlsbad’s South Ponto Beach.

There is a modest-sized free parking lot at the Beacon’s Beach access. Here again, though, you’ll often find it full, in which case you’ll have to hunt for street parking (or come here by foot from another beach).

As mentioned above, Grandview is the northernmost beach of the Leucadia State Beach complex. All things considered, it offers a similar sort of experience as Beacon’s to the south.

It’s a handsome, bluff-nestled stretch of sand (accessed, in this case, by a wooden stairway) ideal for strolling and sunbathing.

As elsewhere in this area, higher tides can limit those activities. You’ll often see surfers here, just as at Beacon’s. Indeed, this is another popular spot for surfing lessons.

Like Beacon’s, Grandview Beach doesn’t have any facilities other than a summer lifeguard tower. But you’re closer yet to South Poncho Beach’s restrooms, reached by walking north.

If you want a bit more of an out-of-the-way feel in your Encinitas sandy beach, consider D Street Beach and its contiguous southerly counterpart called “Boneyard Beach” (or simply “Boneyards”).

You can access D Street Beach/Boneyards by the staircase at the end of D Street, or by walking to it from Moonlight Beach to the north or from Swami’s to the south.

There’s a summer lifeguard tower at the D Street access to these sands, making it a good place for family lounging and swimming during peak season.

The Boneyard Beach section to the south—not officially named or signed, but often treated by locals as a separate beachfront from D Street—is more isolated.

That section isn’t especially kid-friendly, and not only because it’s less actively lifeguarded. Boneyards is also a well-known clothing-optional beach, so let’s just say you could get an eyeful here. It’s also coveted by surfers.

D Street Beach doesn’t have much in the way of amenities. The restrooms and other facilities at the more developed Moonlight State Beach to the north are reachable on foot, though.

The D Street/Boneyards beachfront doesn’t have a dedicated lot, so you need to use street parking unless you’re getting here from Moonlight or Swami’s and using their parking areas.

Officially spelled “Stonesteps” but often written (including on the lovely on-site mural not pictured above) as two words, Stone Steps Beach is a lower-on-the-radar seashore. It lies between Moonlight to the south and Beacon’s Beach to the north. It comes by its name honestly. The beach access here takes the form of a stone stairway negotiating the steep, weathered bluff face to reach the sand.

You’ll find a summer lifeguard tower at this locals’ beach and not much else. This can be a solid place to dodge the crowds a bit and kick back in the sand, walk barefoot along the swash, or practice some sand-castle engineering.

But be sure to study that tide table when planning your outing. At high tide, the beach can be extremely narrow or basically nonexistent. At lower tides, it’s possible to walk to neighboring beaches.

Another note of caution: As the signage suggests, the unstable bluffs here are prone to crumbling or sliding. Don’t spread that beach towel out right underneath them.

There’s a surf break off this shore, too, so you may see some longboarders or shortboarders at play.

None (unless you count the garbage cans at the top of the stairway). Outside of high tide, you can walk down to Moonlight Beach for its restrooms and other facilities.

Sniff out street parking near the Stonesteps Beach access point.

I’d be remiss not to mention the extensive Cardiff-by-the-Sea beachfront lying south of Swami’s. Composed of San Elijo State Beach and Cardiff State Beach, it offers multiple access points sought out by sunbathers, swimmers, and surfers.

While Cardiff-by-the-Sea is technically in Encinitas, it’s often considered its own separate beach area. As such, we’re in the process of working up a standalone guide to its beaches. Stay tuned! 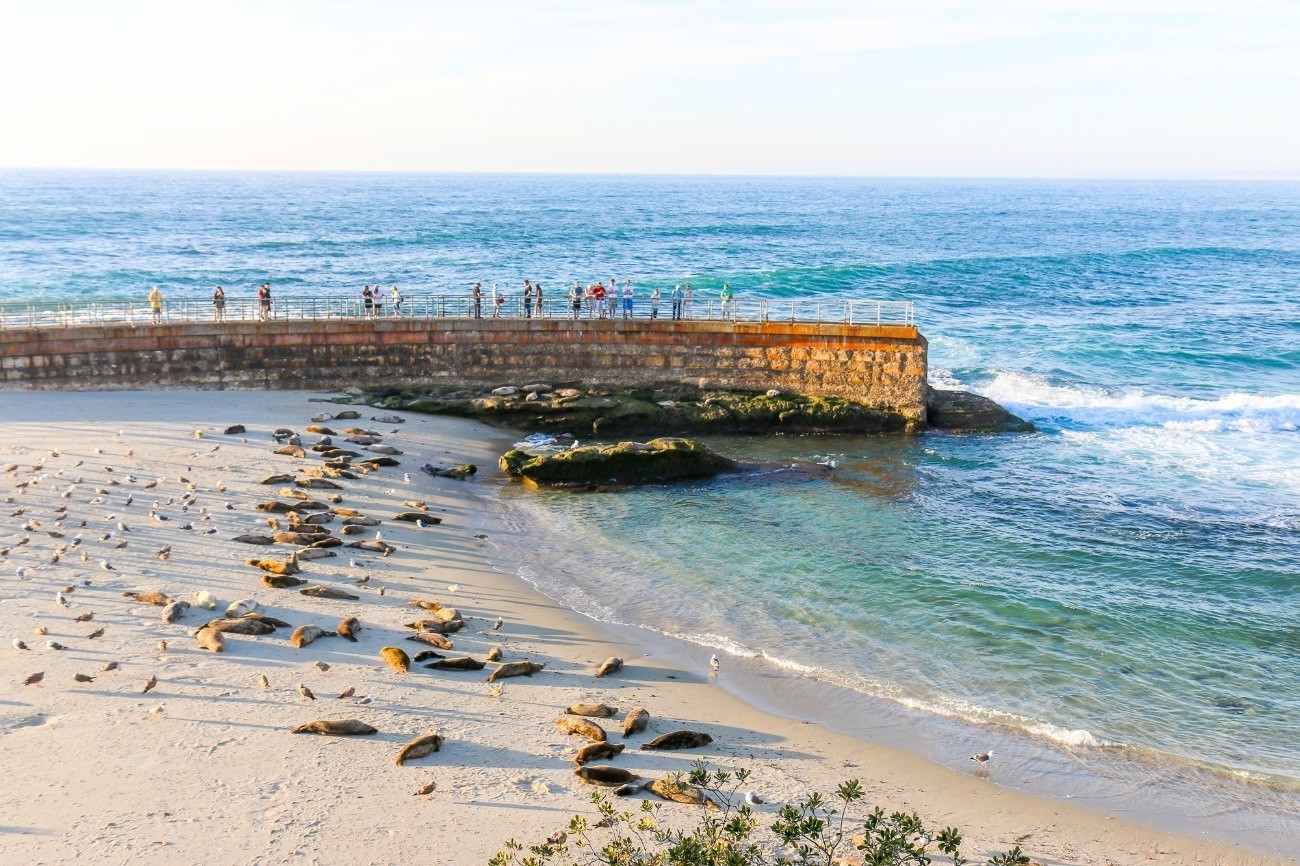 Learn all about the best La Jolla beaches for surfing, sunbathing, snorkeling, kayaking and more fun in San Diego sunshine. 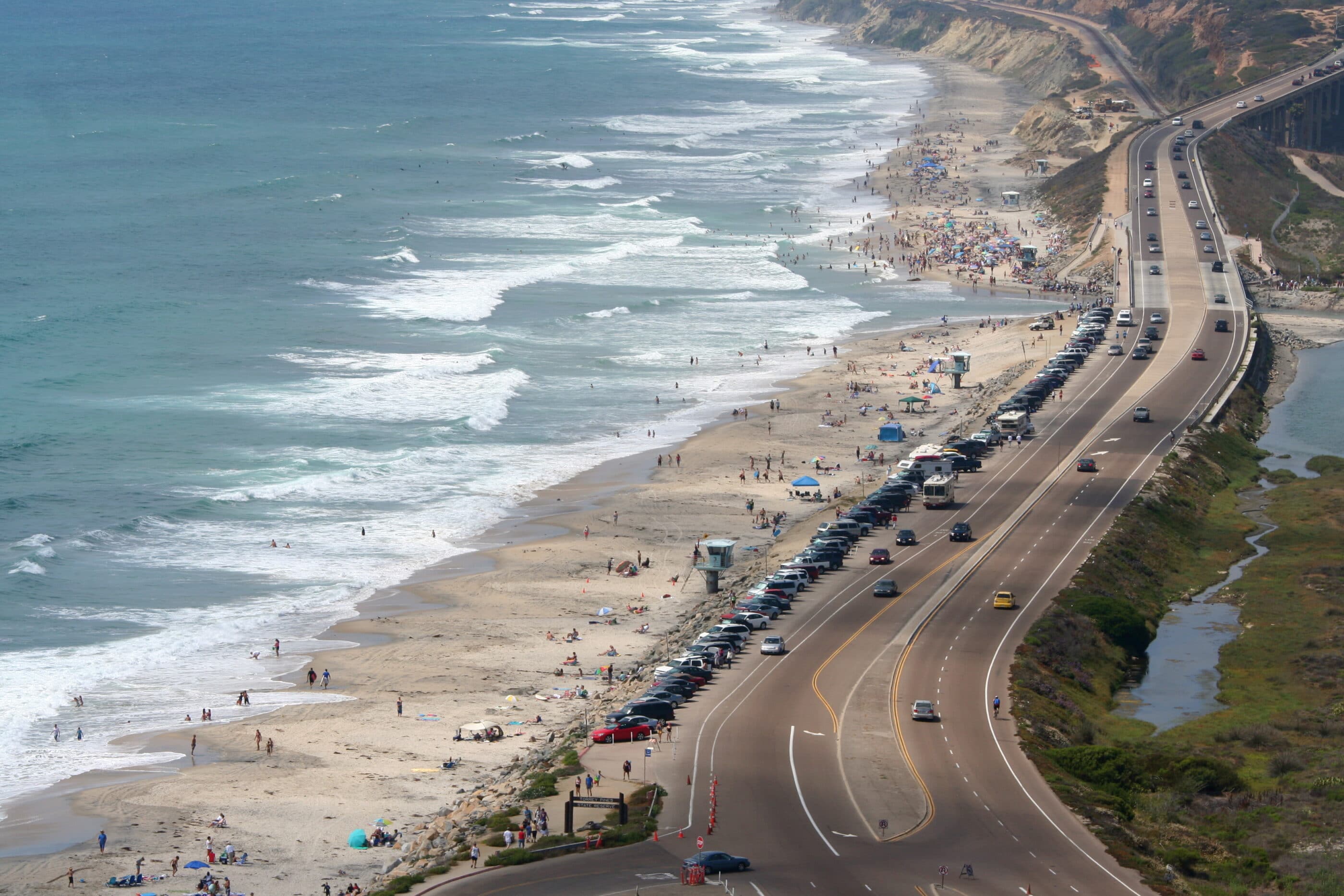 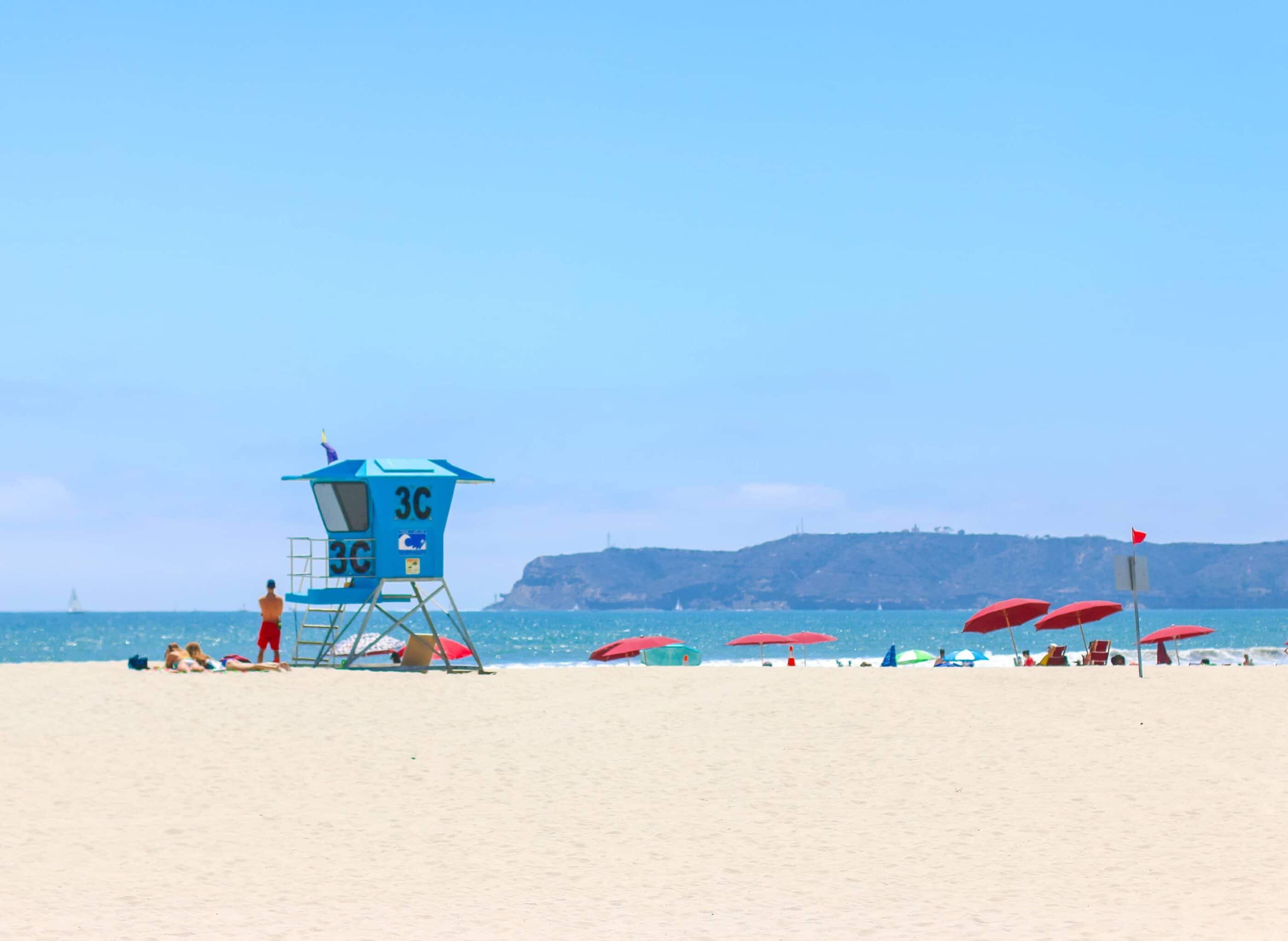 A detailed guide to seven Coronado beaches on the ocean and bay including amenities, parking, things to do and more San Diego fun. 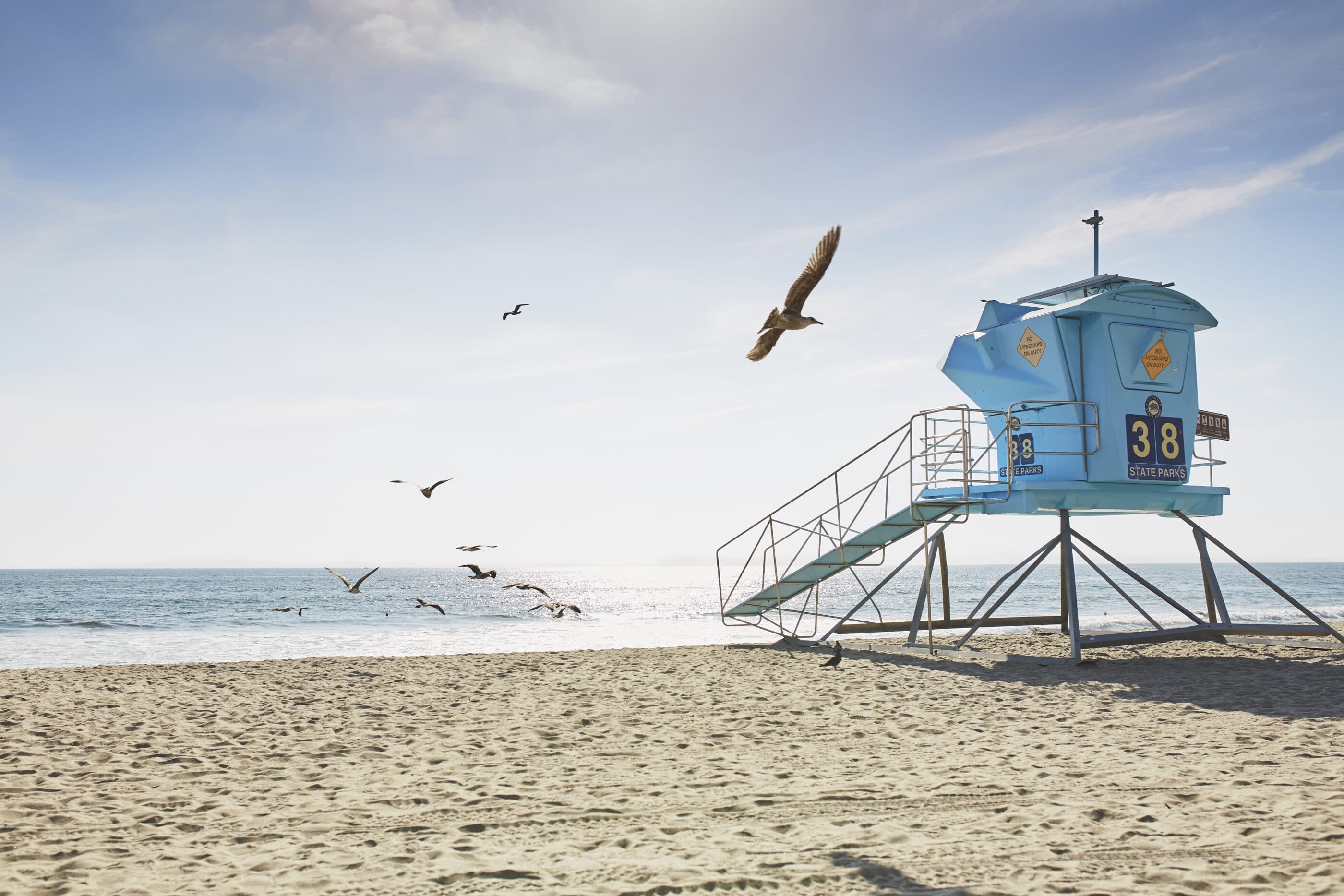