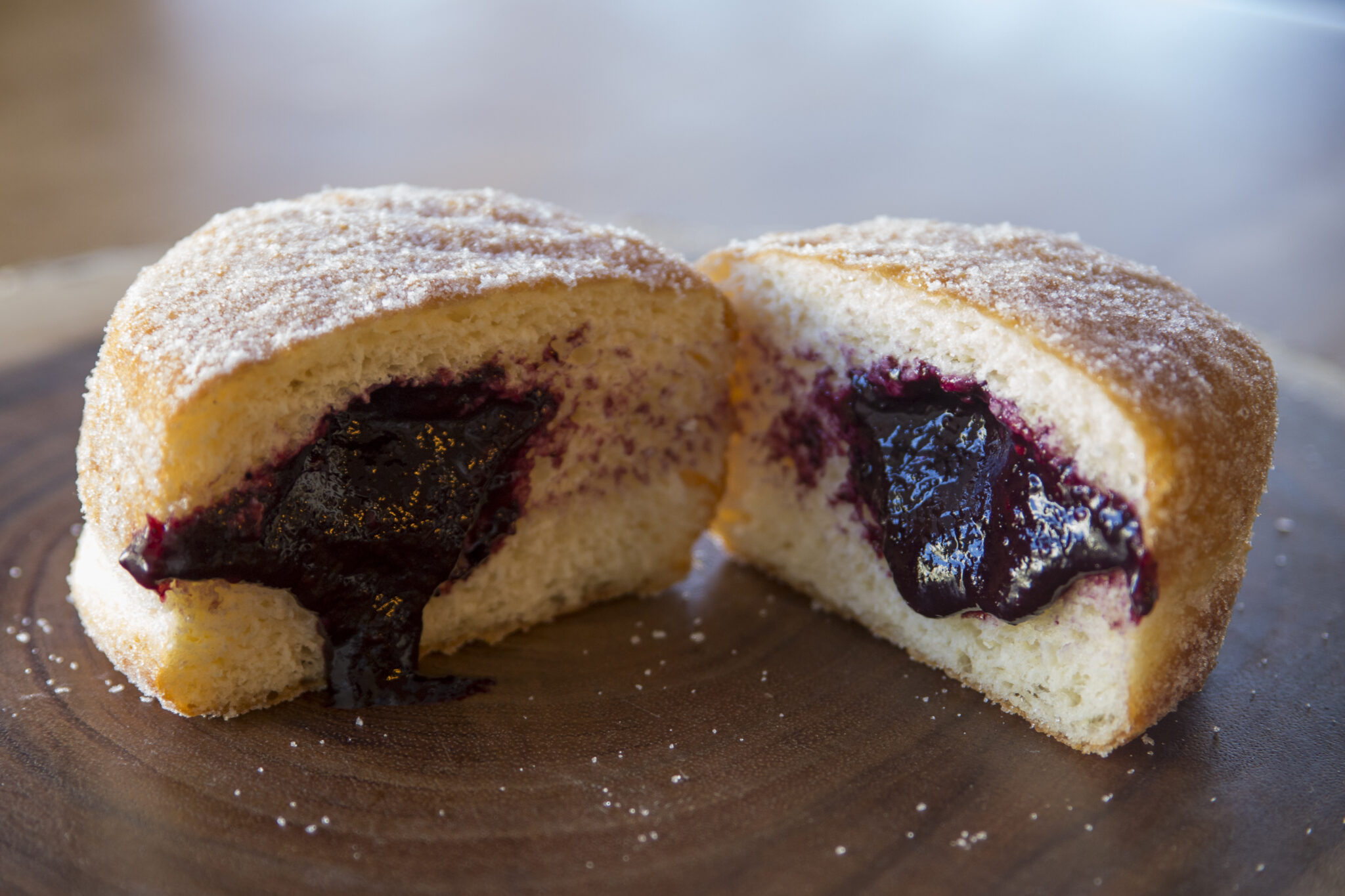 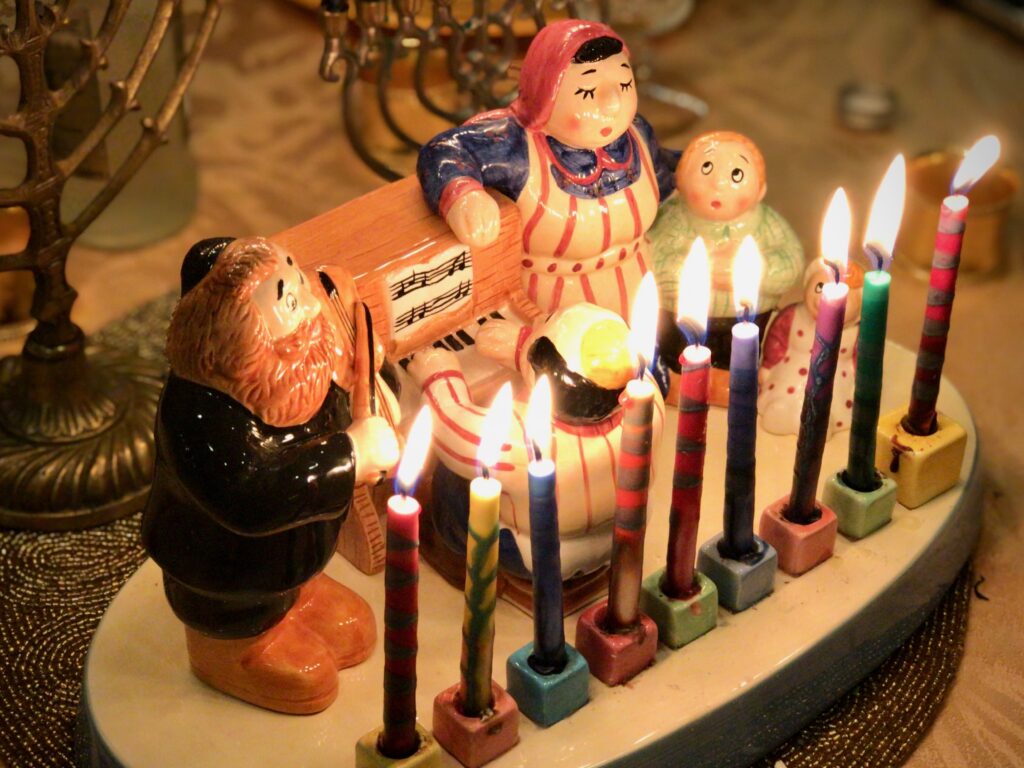 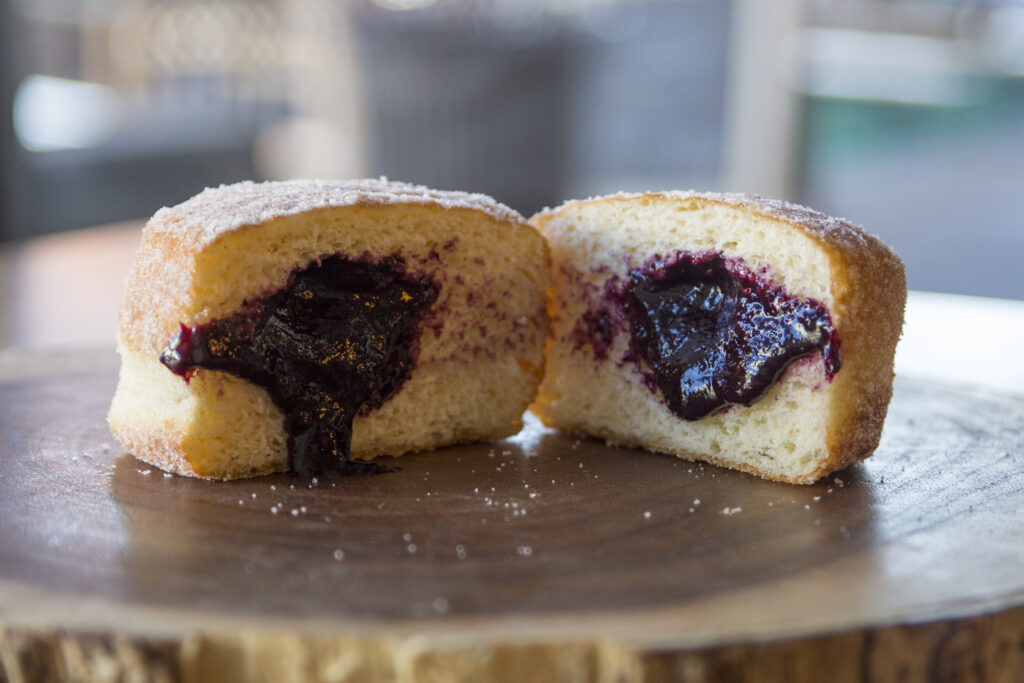 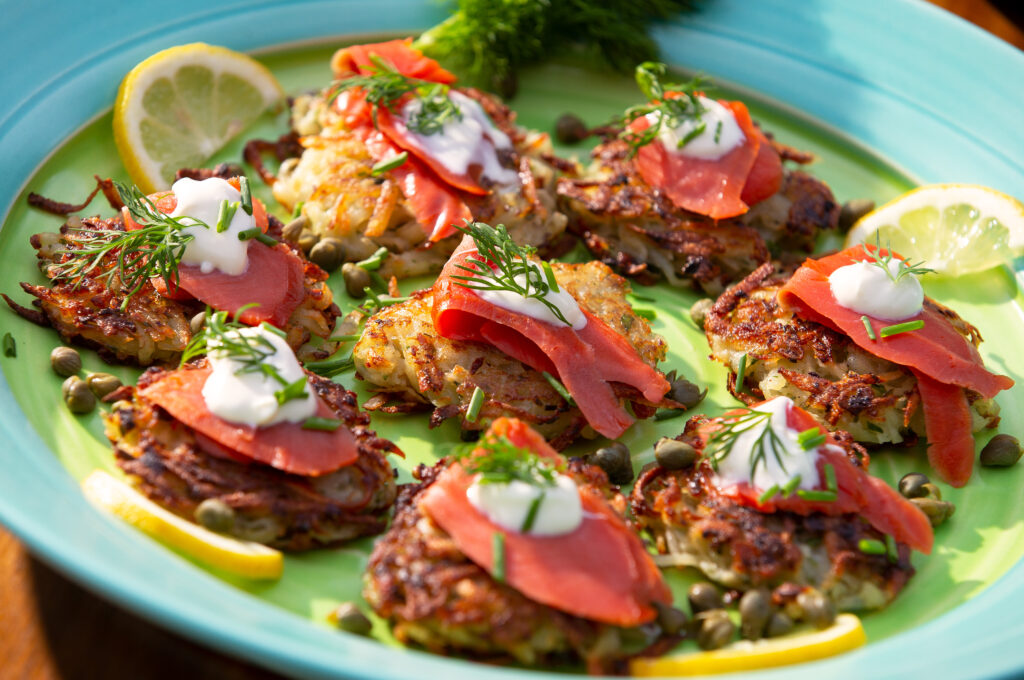 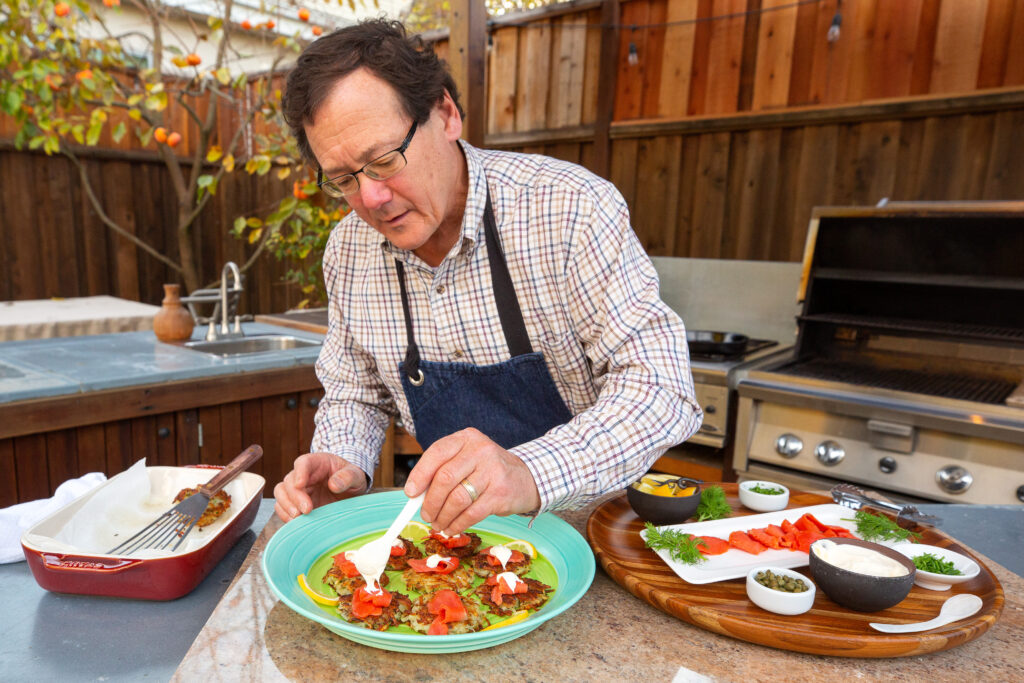 Hanukkah, the eight-day Jewish Festival of Lights, begins at nightfall on Sunday, Nov. 28 this year. On each night, Jewish families gather to light another candle on the Hanukkah menorah while reciting a special blessing.

After the nightly candle lighting, it’s time for food and games — eating latkes with sour cream and applesauce, sufganiyot (jelly doughnuts) and other traditional Hanukkah foods and spinning the dreidel to collect some gelt (usually chocolate coins covered in gold foil).

This is the first time we’ve heard of a drone gelt drop, and we’re intrigued. If you want to check it out, head to the Sonoma-Marin Fairgrounds on the first night of Hanukkah.

La Bodega Kitchen, owned by Meekk Shelef (who is from Haifa, Israel) and Bryan Cooper, will have challah, potato latkes and sufganiyot at the restaurant and for pickup from Sunday, Nov. 28 to Dec. 6 (pre-orders/reservations required).

In addition to the traditional sufganiyot, there will be torta di noci (gluten-free) and a honey date cake for dessert, as well as spiced rosewater apples with pistachio, cardamom and lime juice.

The Bodega Kitchen Hanukkah dinner can be ordered as takeout for reheating at home. Reserve or order ahead by calling 707-827-1832 or emailing info@sonomawineship.com. 2295 Gravenstein Highway S., Sebastopol, 707-827-1832, sonomawineshop.com

This New York-style deli and bar owned by Mark and Terri Stark is selling a take-and-bake Hanukkah dinner to order now and pick up after 11 a.m. from Sunday, Nov. 28, through Dec. 6. It includes Brisket Dinner ($85, for two) with sweet and sour braised brisket, challah, parsley potatoes, pomegranate molasses roasted carrots and sufganiyot. A la carte items can be added for an extra charge, including potato leek latkes with applesauce and sour cream, matzoh ball soup, chopped liver and onions, smoked and pickled fish board and knish. Sweets, including rugelach (a pastry filled with nuts, poppy seed paste, chocolate or jam), hamantaschen (shortbread-like cookies filled with jam), halvah (a dense, tahini-based candy) and chocolate babka are also available to order. Order online at grossmanssr.com. 308 Wilson St, Santa Rosa.

This friendly neighborhood grocery store is selling a Hanukkah dinner for four, to pick up after 4 p.m. on Dec. 3. The dinner, which will be hot and ready to eat, includes choice of wood-fire roasted whole chicken or a beef brisket and comes with organic potato and vegetable latkes, matzoh ball soup and an organic mixed green salad. The chicken dinner is $65; the beef brisket dinner is $85. The Hanukkah dinner tends to sell out fast, so reserve yours soon by calling 707-753-4974. 10070 Main St., Penngrove, 707-753-4974, penngrovemarket.com

This Santa Rosa restaurant got its name from the word zaftig, which means juicy in traditional Yiddish, and at Zoftig Eatery means flavorful and generously portioned dishes. This Hanukkah, Zoftig owners and chefs Matt and Sonjia Spector will serve latkes, available for pickup. Order a half dozen ($16) or a dozen ($30) potato latkes with applesauce and sour cream online to pick up 10:30 a.m. to 6 p.m. on Wednesday, Nov. 24, or on Monday, Nov. 29, to Dec. 3. You also can order by calling 707-521-9554. Allow 24 hours for pickup. Zoftig is closed Nov. 25-28. 57 Montgomery Drive, Santa Rosa, 707-521-9554, zoftigeatery.com

The Cohen family have run this doughnut shop for 12 years. Husband and wife Harvey and Georgia take turns operating the vintage doughnut machine to make mini doughnuts, sold by the dozen in a cone. Daughters Maryn and Zorelle also work in the shop. For Hanukkah this year, they will have raspberry jam doughnuts (by the dozen) and Hanukkah doughnut decorating kits ($16). The kits include four larger-size doughnuts, one chocolate glaze and one sugar glaze, piping bag and three types of sprinkles. Pre-order the kits by emailing harveysdonuts@yahoo.com or via direct message on Facebook. Free delivery available within the town of Sonoma and Glen Ellen. 414 First St. E., Sonoma, 707-246-5928, harveysdonuts.com

Bruce Riezenman, a longtime Sonoma County chef who co-owns Park Avenue Catering with Ari Weiswasser of the Glen Ellen Star, has spent a lifetime perfecting the delicious potato pancakes he used to eat as a child with his parents and grandparents during Hanukkah. He likes to top his latkes with slices of his Citrus-Cured Salmon, a dollop of crème fraîche, a sprinkle of herbs and a handful of briny capers. — by Diane Peterson for The Press Democrat

Combine the grated/pulsed onion and the egg in a mixing bowl.

Using the large side of a box grater, grate the potatoes into a strainer that is suspended over a bowl. Once the potatoes are grated, squeeze out as much of the excess potato liquid as you can into a separate bowl and then mix thoroughly with the onion and egg mixture.

Let the liquid from the potatoes settle for 5 minutes and then carefully pour off the water that has collected, being careful to save the potato starch that has settled on the bottom. Scrape the starch into the latke mix; add the matzo meal, chives and parsley along with some salt and pepper and mix thoroughly. Cover the mix with plastic wrap and return to the refrigerator for 20 minutes to allow the matzoh meal to absorb some of the liquid.

Place a cast-iron skillet (or sauté pan) over medium heat with enough canola oil to generously coat/float on the bottom of the pan. When the oil is hot but not smoking, stir the latke mix (to make sure the liquids are evenly distributed) and spoon a heaping tablespoon of the mix into the pan. Press down to flatten the mix and repeat until you have filled the pan with as many hors d’oeuvre-sized latkes as will fit. Cook over medium heat until the bottoms are nicely golden brown. Flip latkes over and cook the second side the same way (approximately 4 to 5 minutes per side).

When the latkes are done, remove to a paper towel to absorb any of the excess oil and sprinkle with a touch of salt. Place on a clean baking sheet to keep warm in the oven. Repeat with the rest of the latkes.

Making your own cured salmon is much easier than most people think and well worth the effort.

To cure the salmon:

Mix all dry ingredients together with the brandy. Place a large piece of plastic wrap on the counter and put half the salt mixture in a layer about the same size as the salmon in the middle of the plastic wrap. Place the salmon skin side down on the salt mix. Top the salmon with the rest of the mix. Wrap tightly around the salmon, leaving one side slightly open for liquid to escape. Place the salmon in a baking dish and top it with a heavy pan or other flat-bottomed object that weighs at least a pound or two.

Place in the refrigerator overnight. Turn the plastic with the fish over the next morning and put the weight back on it. Do this again every 12 hours or so for a total of 24 to 48 hours depending upon how thick the filet is.

Once the salmon is cured and relatively firm, remove it from the plastic, rinse off the salt mix and pat dry. Re-wrap in clean plastic and hold until you are ready to use.

1 – Make sure to keep everything cold before making the mixture.

2 – Use a food processor to grate the onions, pulsing them into small pieces (stopping short of pureeing them).

3 – When you grate the russet potatoes, grate them into long strips.

4 – Add the chopped parsley and chives to the potato mixture at the very end, then mix until you see that they are well distributed. That lets you know that all the ingredients are integrated. Keep stirring the mixture as you make new latkes, to reintegrate the liquid into the mixture.

5 – Make the latke mixture at least 20 minutes early and refrigerate. That way the matzah meal can absorb the liquid from the onions and potatoes.

6 – Use a large tablespoon to scoop the latke mixture out, and do not press the mixture together. You want to make loose pancakes that will stay airy in the pan.

7 – As the frying continues, be aware that the latkes will brown up more quickly.

8 – Take the latkes out when they have a nice brown color on both the top and the bottom, then transfer them to a baking sheet and hold in a 350-degree oven for about 10 more minutes. That way, they will continue to cook through to the center while staying warm.

9 – If you are giving a party, you may want to fry up the latkes ahead of time, then hold at room temperature. When ready to serve, put them in a 350-degree oven for 10 minutes or so to reheat.

10 – When removing latkes from the pan, place on paper towels first to absorb the excess oil.