Skip to content
When we moved into this house there were projects that we knew we wanted to get to eventually, but to be totally honest the bathrooms were not high priority on the list. Our master bathroom was totally fine the way it was, but then I got an opportunity for a sponsored post (coming soon), and thought that if I was going to be taking pictures in this space it might as well look nice, and then Derek and I decided to use the money from that sponsorship to pay for this update. 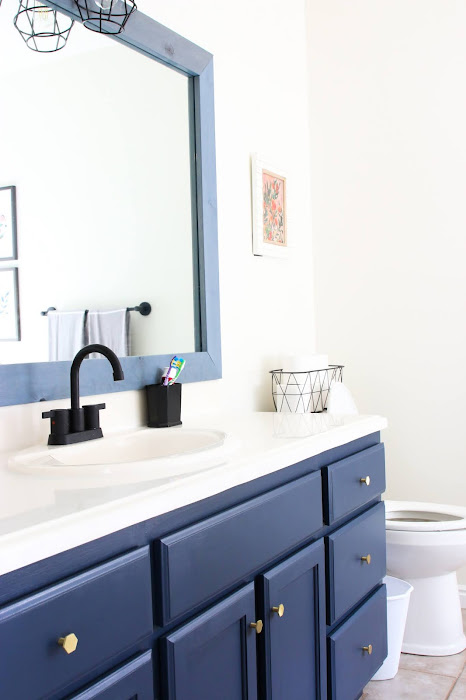 Probably too many details on the financial end of things, but I love being able to be transparent about how we do our updates. I realize updating a home costs money, and with this home I want to be able to share how we do these updates in a very transparent way without breaking the bank.
I will go into detail in future posts with tutorials on how we did some of these things, like framing the bathroom mirror, and painting the bathroom vanity, but for this post I'm simply going to share what we did, where we bought certain things, and how the space came together.
The first thing I knew I wanted to do was paint the vanity navy. We used the Behr Marquee paint from Home Depot in a satin finish, and had it color matched to Benjamin Moore's "Hale Navy". I then found these hexagon knobs on Amazon, which serisouly might be one of my favorite details in the space. They were very inexpensive and are the perfect modern statement for the space. 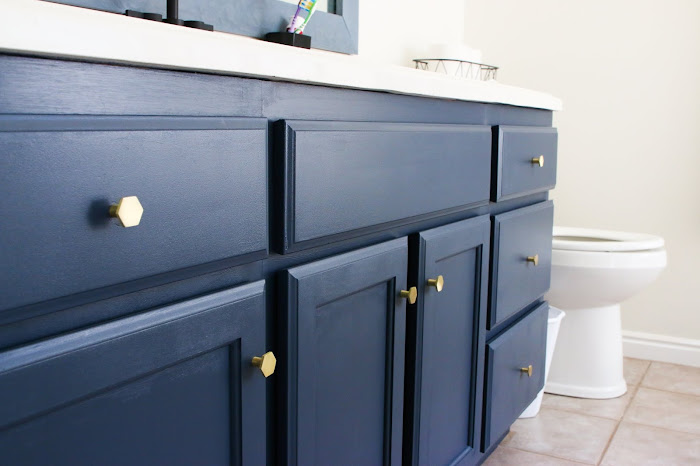 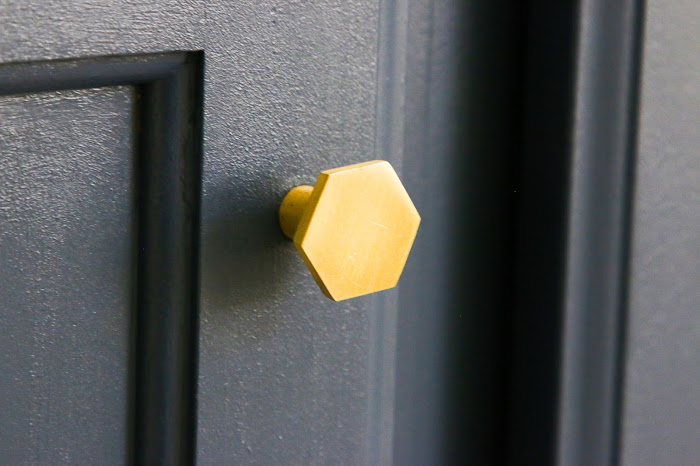 I've been loving matte black everything lately and this faucet was a pretty inexpensive swap that made a huge impact on the overall look of the space. Ironically when Derek was changing it, he found a massive hole in the old pipe that just happened to not leak yet. I'm glad we fixed it now on our own terms instead of the universe's terms later down the road. 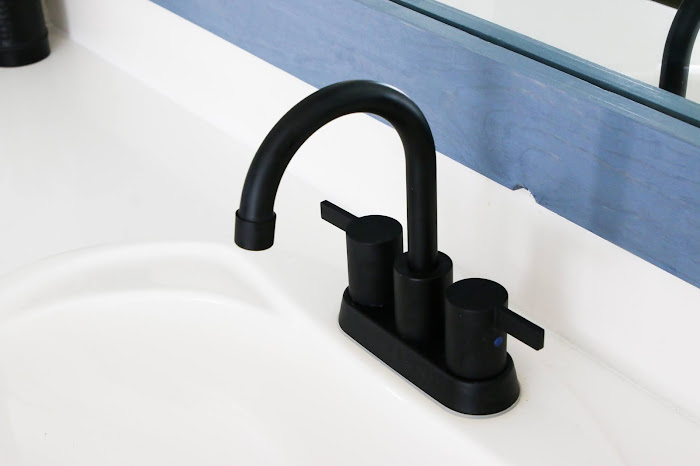 I wrote a blog post two years ago in our last house about how to frame your bathroom mirror, and we followed those same instructions for this space. We ran into some issues with the wood being bowed when we first purchased it, so make sure if you follow that tutorial to make sure your boards are pin straight. If you get that detail right the first time, the process is super easy! We stained the boards with "slate" from Varathane which was supposed to be a gray color, but they pulled really blue. Luckily we don't hate it and are pleased with the overall result. 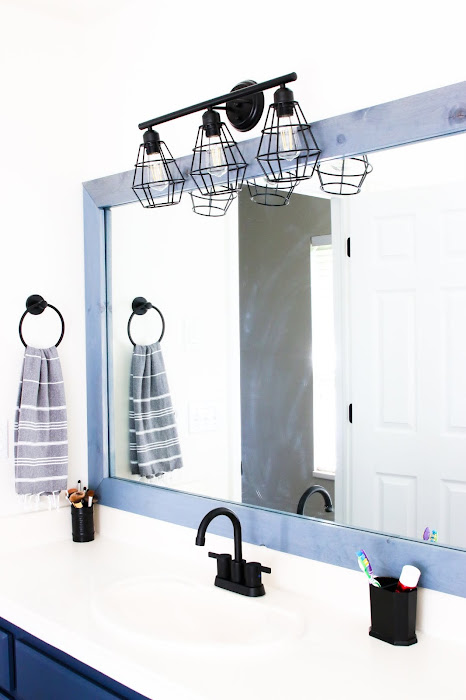 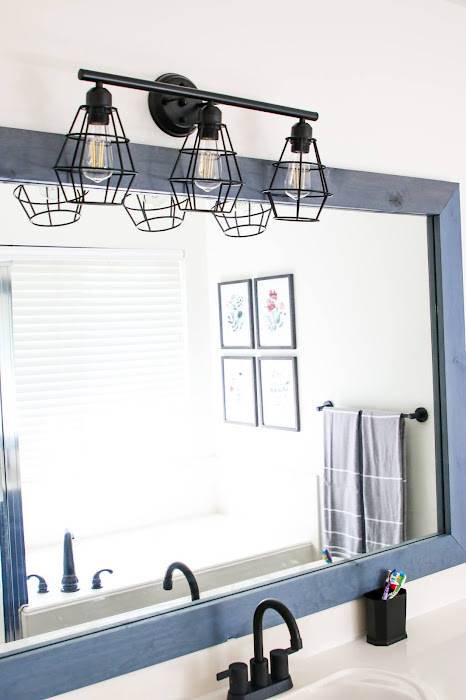 This bathroom didn't have a towel bar for our bath towels so we knew we were going to be adding one at some point. We spent $40 and bought a matching set and replaced the old toilet paper holder, hand towel ring, and then added in the bath towel bar. It feels nice to not hang the towels over the shower door anymore! 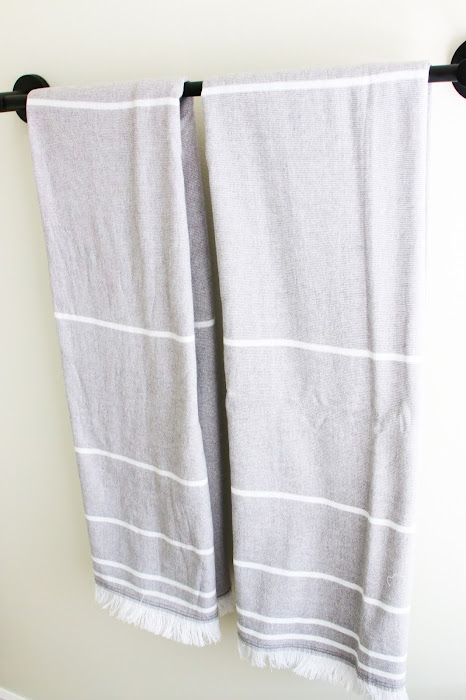 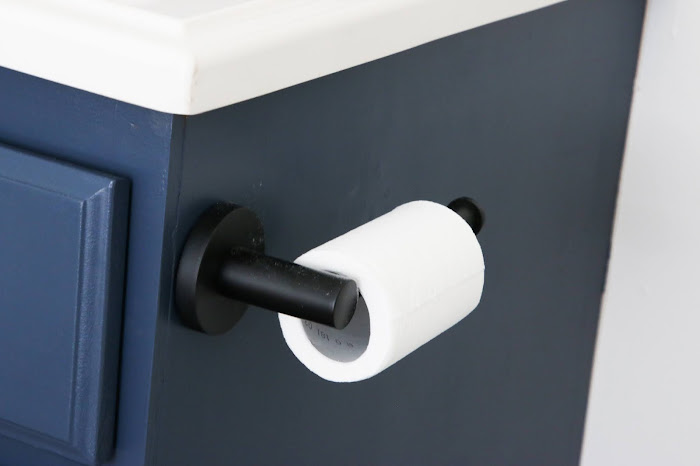 I wanted to get some bath towels that were more modern/bohemian than a traditional bath towel. We found these on Amazon, and while the fabric isn't the same as a typical bath towel, they're really absorbent and feel great when you're drying off. Nothing like those microfiber bath towels that are just the absolute worst! 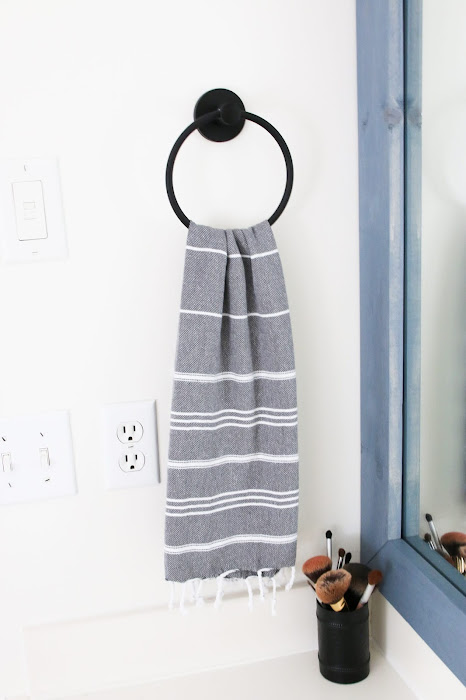 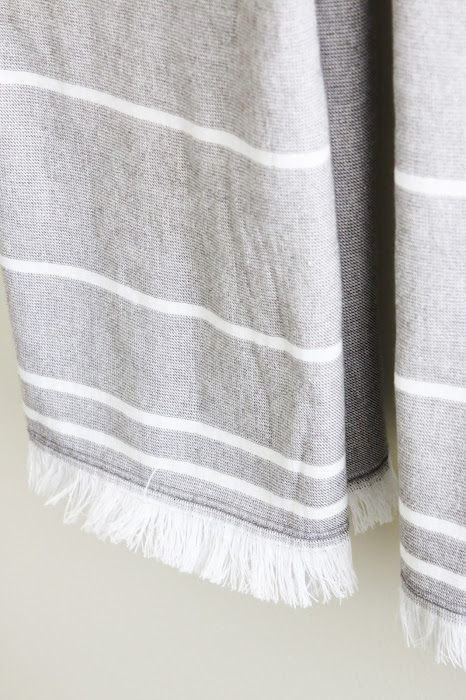 We were originally going to hang shelves above the tub, but then I figured as a self proclaimed minimalist adding shelves would also mean adding a ton of knick knacks that were just going to sit on a shelf forever. I decided to add these four picture frames with water color prints that I bought from jane.com. I love the look of them and think they fit the space perfectly. The glass in one of the frames came broken so Amazon let us keep the frames and gave us a full refund. It turned out to be a nice $44 win. (Also does anyone else hate how expensive frames are?) 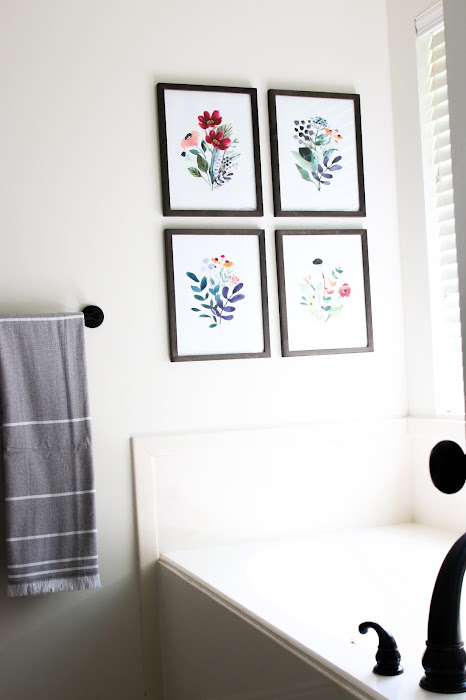 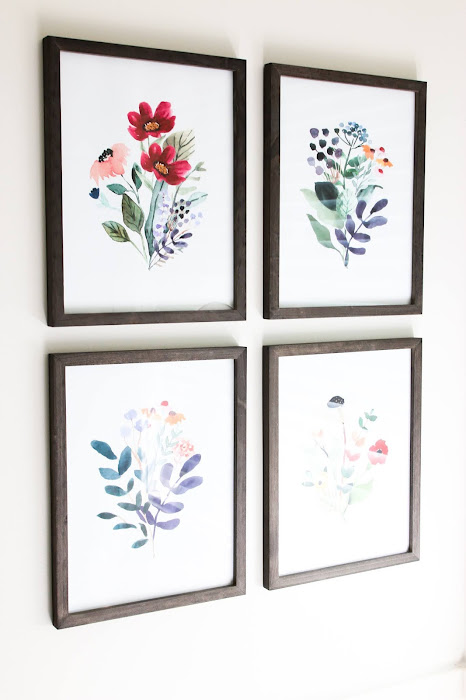 The picture above the toilet was painted by a sister missionary we knew from Georgia. It's a picture of peaches and I just love her, peaches, and Georgia so much that I needed to buy it. We've had it sitting around for months now and then when we put the space together it just worked perfectly. 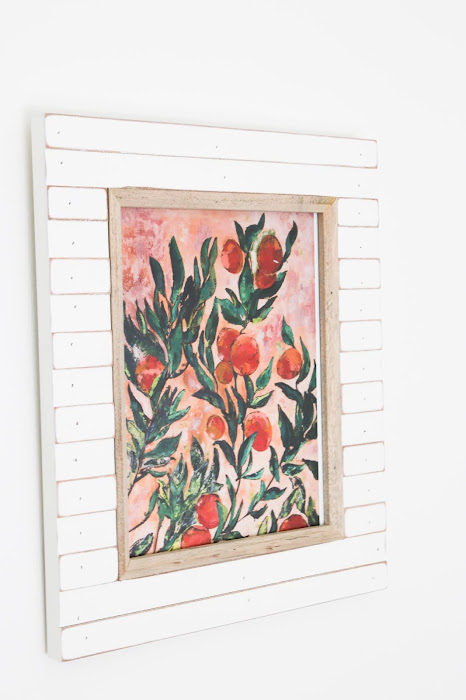 We're slowly updating all the hinges and door knobs in our house to matte black so we switched those out in this bathroom just like we did in the office downstairs. We also painted the door white and it looks so fresh and new! 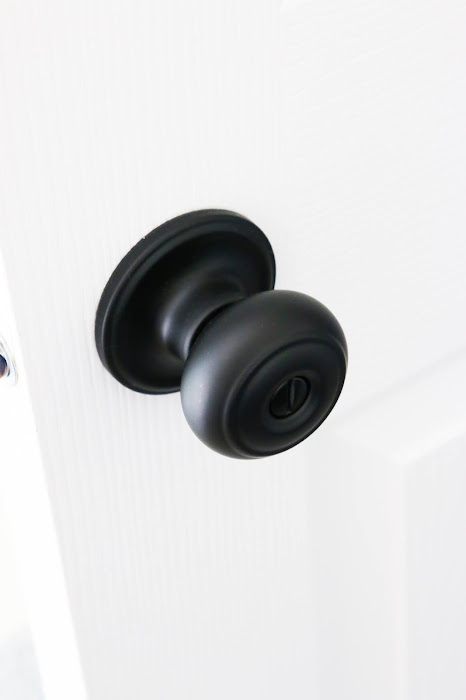 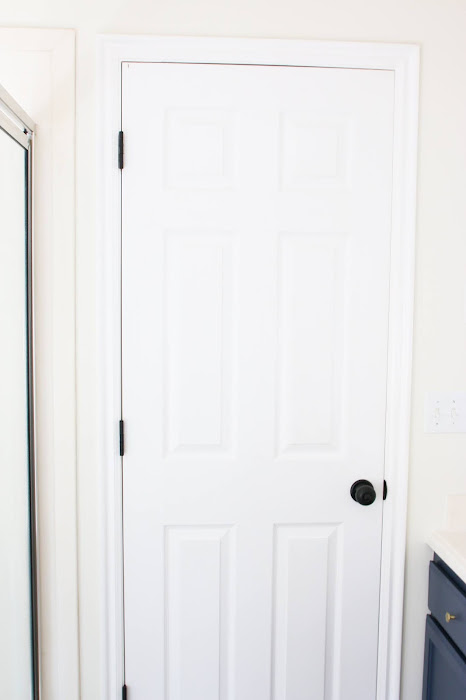 The wire basket on the toilet, and the tooth brush and make up brush holders were all actually silver previously. I bought a can of matte black spray paint for $3 and all of a sudden these mismatched pieces fit the space perfectly. We bought the wire basket from Walmart, but the brush holders we'd had from past bathrooms and just made them all work here. 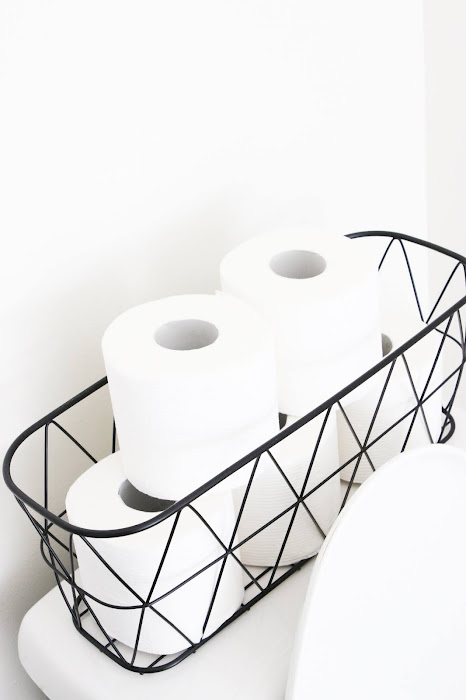 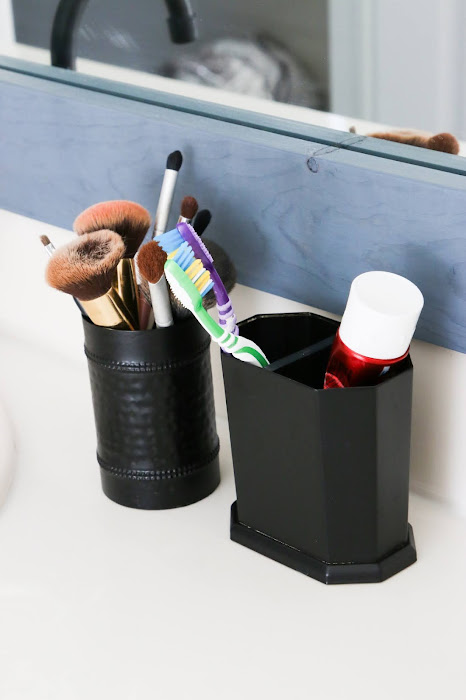 Lastly, we updated the light fixture. We went for this super modern one which I love, but in full transparency Derek kind of hates it. His entire family has pretty sensitive eyes, and he prefers a light fixture that you can't see the bulb because when the bulbs aren't covered the light is too much for him. That being said we both love the look of it, it could just be better in practicality. We did use 60w Edison bulbs in it, which are much dimmer than the fluorescent lights we usually use, and that's helped quite a bit for Derek's sensitivity (although he says it's still not perfect!)
We did look into switching the light, but anything that had the bulbs covered more, while still matching our style was almost triple what we paid for this. So in the name of frugality, we're keeping the light for now. 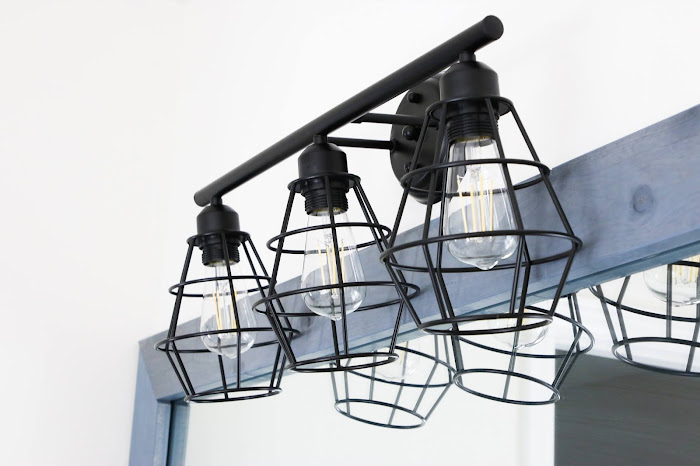