We woke up to another perfect day in paradise! 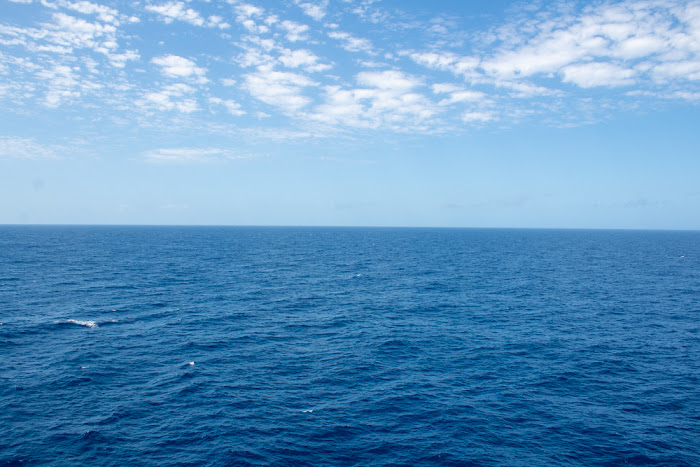 Today was the day for making sure we finished up all the things on the kids' (and my!) must-do list. For instance, our first at-sea day had been super windy and a little rainy, and the next two days we'd been busy with our port adventures, but on this day the Gulf was smooth and the sun was shining--it was perfect weather for the ship's water park! 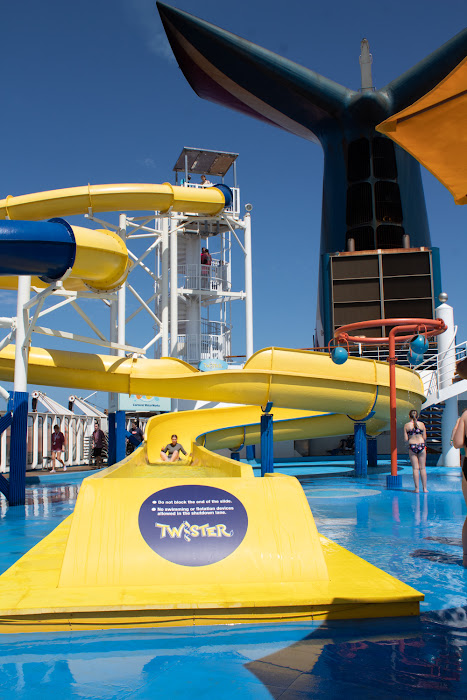 A couple of other people had the same idea... 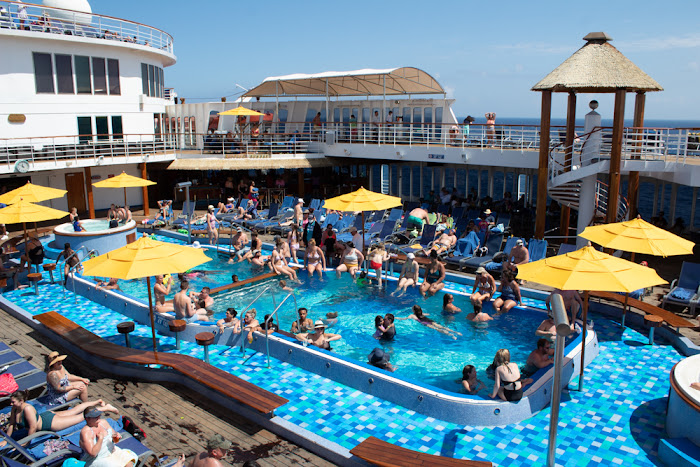 One of the things I had been worried about, before the cruise, was finding space for everyone to meet up on the ship. My Girl Scouts like projects, and they'd decided in their planning meetings that they wanted time on sea days to hang out altogether.
Fortunately, finding meet-up spots wasn't a problem. In fact, during our designated meet-up time to work on our travel journals in the Lido Buffet, there happened to be a Chocolate Buffet! 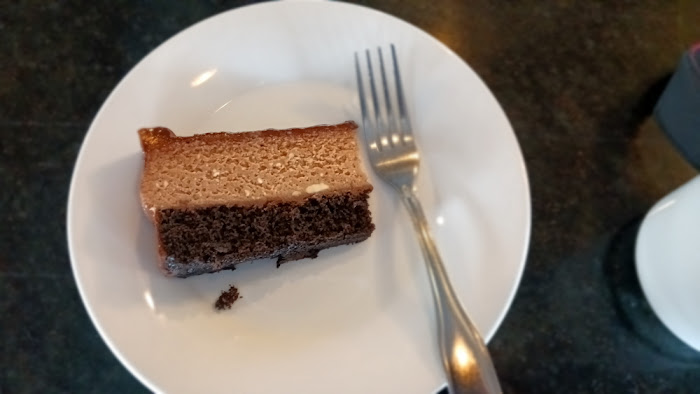 The kids *may* have done more eating chocolate than travel journaling, but hey, they were happily hanging out altogether as they'd wanted, and everyone ended up more or less putting marks on paper.

A break for more swim and sun, a visit back to my stateroom--

--to pick up something special, then up a billion decks and across the ship to a brand-new meet-up spot. In one of our trip planning meetings, I'd brought several different copies of our ship's Fun Times, the on-board activity schedule, so the kids could peruse it to see what kinds of things there were to do on the ship. A couple of the kids had immediately zoned in on the BINGO offerings, alerted the others, and then the whole troop was beside themselves with excitement about playing BINGO! On a cruise ship!

Was it pure coincidence, then, or was it fate that just a week later I found a NIB BINGO game at Goodwill for only five bucks?

I don't even care which it was. We enjoyed the snot out of our BINGO set! 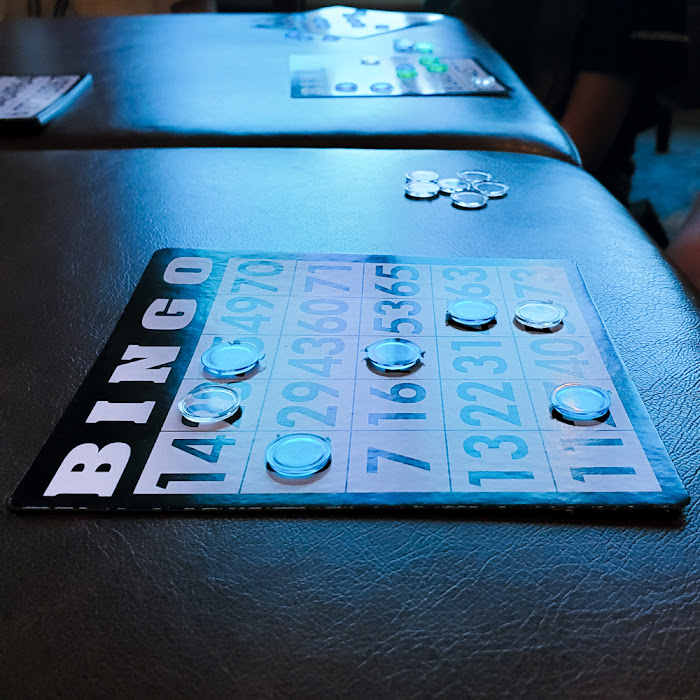 We played BINGO right up until most of the kids had an appointment for an all-ship digital scavenger hunt, then Syd helped me pack up and we went to the Lido Buffet so she could get ice cream and I could get lemonade.

As we were walking away from the buffet, Syd with her absolutely massive ice cream cone, a group of four fully-grown adults ran up to us. One guy thrust his cell phone in Syd's face and said, "Take a bite of your ice cream!"

We both froze, and I, at least, just blinked a few times at them, not a coherent thought in my head.

The guy insisted, his phone still in Syd's face, "Take a bite of your ice cream, please!"

I blinked a couple more blinks.

Someone from the crowd of onlookers behind the guy piped up helpfully, "It's for a photo scavenger hunt!"

I hissed, "Just do it!" to Syd, she took a bite of her ice cream, the guy snapped her photo, and the mob moved on.

As we started to walk away, Syd said, as if apropos of nothing, "The weird thing is that's the second time that's happened to me today."

Later, some of the other Girl Scouts confirmed that a picture of someone taking a bite of an ice cream cone was, indeed, on the digital scavenger hunt list. But they'd gotten their OWN ice cream for their picture, because honestly, who would pass up getting themselves an ice cream cone?

Syd took herself and her ice cream back to her stateroom, while I got my last 4:00 hamburger: 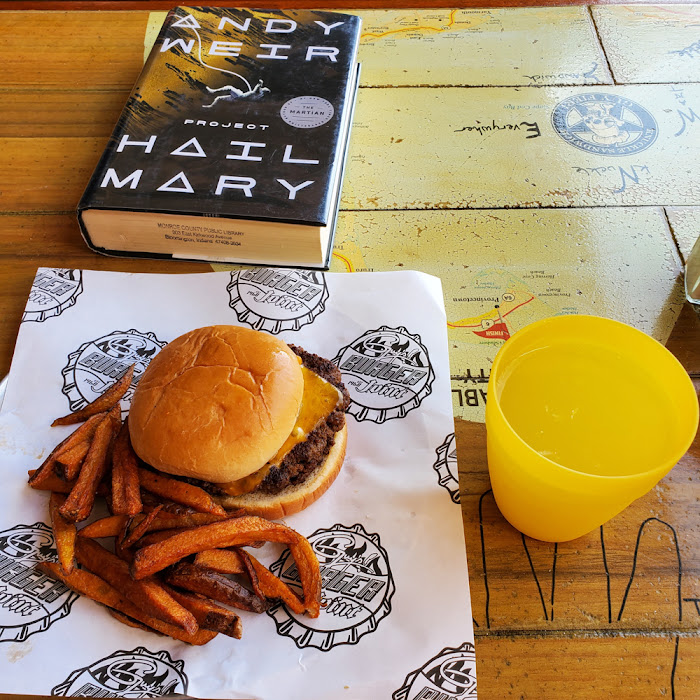 For the past few days, I'd been keeping an eye out for great photo spots on the ship, so I was all ready when, a little later, I met my entire Girl Scout troop outside their staterooms, each dressed in their Girl Scout uniform. I believe in managing expectations, so the kids already knew that I'd insist on walking them all over the ship for an hour, taking their photos in every single picturesque spot on the ship. The kids were all excellent sports, and now we've got photographic evidence of the magical memories that we made on our troop trip!

I knew Matt would probably insist on driving the 10.5 hours home tomorrow all by himself (I don't break the speed limit as shamefully as he'd prefer...), so I volunteered to be the late-night chaperone.

This kid kept me company for a while: 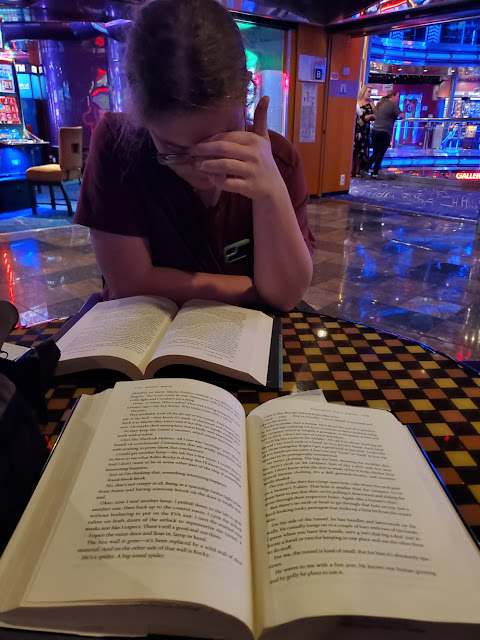 I noticed, while we were sitting here, that we were sitting at one of the tables Matt and I had walked past on our first night on the ship, when I'd been so overstimulated and overwhelmed by the cacophony and pretty sure I'd made a HUGE mistake, sensory-wise.
But on this evening, Will and I were sitting at a table for two, happily engrossed in our novels. Behind me and to each side were other people laughing and talking at their own tables. In front of me was the casino, blaringly noisy and blinking with lights, and every now and then I'd call Will's attention to someone's pursuit of prizes at the claw machine. From somewhere to my right was a bar with a live performance going on, and down the hall to my left was another concert space with another live performance, and I could hear both of them simultaneously. I caught a video when the band on the left started playing "Sweet Caroline," so I could memorialize everyone at the tables and in the casino coming together to sing the chorus. In the video, Will doesn't even look up from her book during the all-ship sing-along.
All that chaos didn't seem overstimulating anymore, so I guess that's a new thing.
And I can snorkel!
After midnight, I swear there was nobody left awake on the ship except for roving groups of frolicking teenagers... and me, the Girl Scout chaperone. I had a few kids who didn't want to say goodbye to all their new friends yet, so they gamely hauled me around like luggage from place to place, from the teen room to the Lido Buffet to the karaoke bar to mini golf to the pool deck and back to the buffet. A kid would call out "Ms. Julie!" and I'd look up from my book, follow them at a discrete distance to the next location, plop down by the door, and dive back into my book until they called for me again. I pretended that I was a Secret Service agent guarding over the president's children while ensuring that they had as normal of a social life as possible.
Still--YAWN!!! 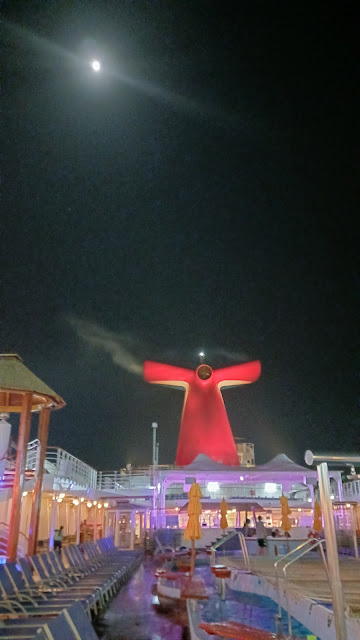 But no harm in enjoying one last night of balmy sea air and moon just past full. By this time on the next day, we'd all be back home where it was 40 degrees, and there were groceries to buy and our own meals to prepare and our own beds to make up and nobody making us towel animals and nobody batting nary an eye no matter how many different desserts we wanted...

I miss you, melting chocolate cake!