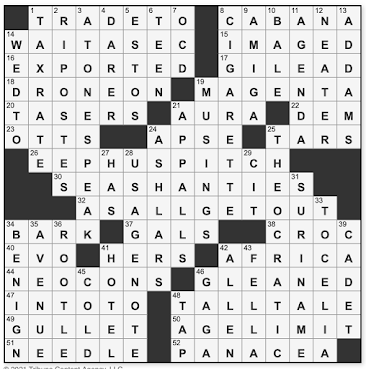 I had a very nice time solving Dave's initial puzzle. It seems incredible that his first puzzle is a themeless Saturday effort. Linking EEPHUS PITCH and AS ALL GET OUT seemed a natural as you'll see. Here's a nice note from Dave:

Hi Gary,
A brief note below, if you wish to use it.
Thanks,
Dave

Since this is my first-ever published puzzle, I’d be remiss if I didn’t pluck the low-hanging fruit and say: “Hello, (Cross)World!”
I’m grateful to Rich for giving me a shot and also for greatly improving the puzzle with his editing. Any remaining deficiencies are solely on me. I hope the puzzle brightened your day, but if you wish to fulminate, lightning can be directed to semiwild.lava@gmail.com . 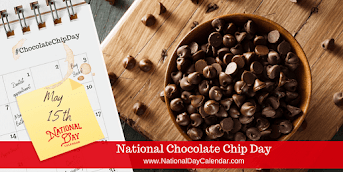 It's also National Chocolate Chip Day! So get out some milk and do some dunking along while celebrating Dave's first foray into crossword construction.

Across:
1. Exchange with, in sports: TRADE TO - The Colts had to TRADE John Elway TO Denver because he refused to play for them when he graduated from Stanford 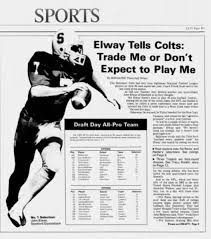 8. Changing environment: CABANA - The first of some really "out there" cluing that makes for real challenges. No ecology here, just somewhere to change into or out of your swim suit.

15. Conceived: IMAGED and 4. Bold type: DARER - Rank up there with HUGER for clanking off my ear
16. Sent abroad: EXPORTED - This company in my hometown has EXPORTED tons of specialty meat to Japan in the last 23 years 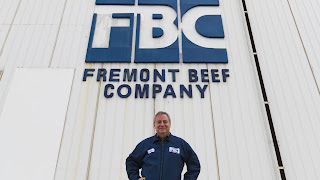 17. Source of biblical medicine: GILEAD - Here ya go
18. Inadvertently test an audience's tolerance levels: DRONE ON - Our pastor did DRONE ON for 20 minutes when the 100 kids were confirmed two weeks ago.

19. Color in four-color printing: MAGENTA - Shaquille O'Neal is pitching bottles of ink to refill your printer cartridge. Can you see the MAGENTA bottle in his hand? 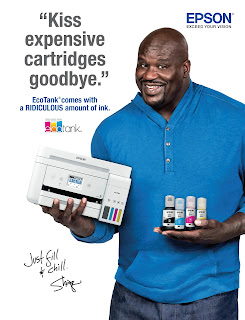 20. What suspects may be charged with: TASERS - More funky cluing! 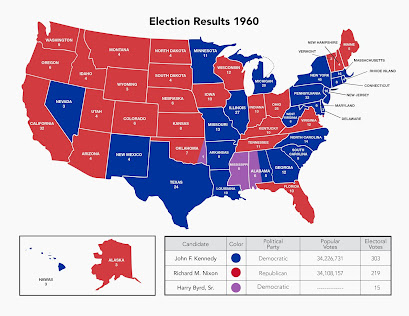 25. Excoriates: TARS - Synonyms.com listed 29 words for excoriate and none of them were TAR but I see David's i

26. High-arcing toss first attributed to Rip Sewell: EEPHUS PITCH - Gotta love this! It's from the Hebrew word "efe" which means nothing. That batter will be as mad 32. "... like you wouldn't believe!": AS ALL GET OUT.

30. Water music?: SEA SHANTIES - What Shall We Do With A Drunken Sailor comes to my mind. How about doing a chorus Spitz? 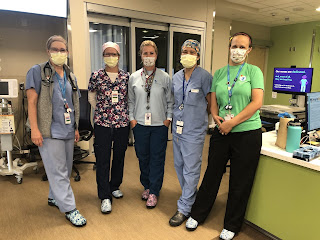 41. Towel designation: HERS - HERS and OURS 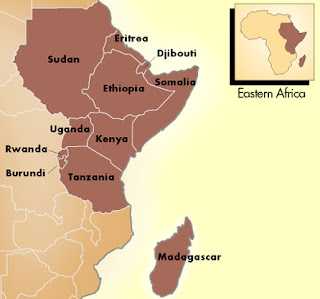 44. Ones moving to the right: NEOCONS.

47. Completely: IN TOTO - My first fill was ENTIREly wrong 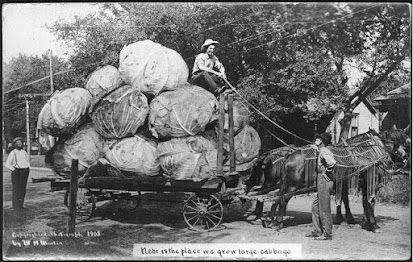 49. Esophagus: GULLET - You didn't put THROAT first like I did? 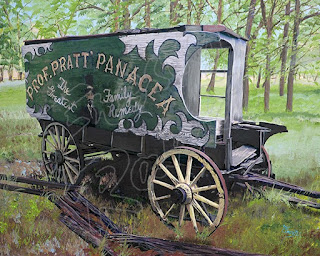 2. Some wisecracks: RIPOSTES - I'll bet you know the insult that preceded this RIPOSTE. *Answer below 5. These, in Cádiz: ESTOS - If Kramer said his line in Spanish, it would be "ESTOS pretzels me están dando sed" 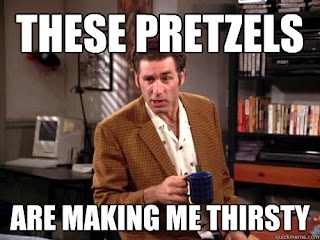 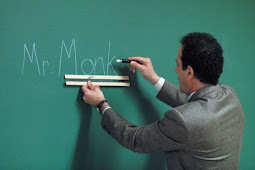 8. Smoke: CIGARETTE - It's great that I rarely seen any of these today 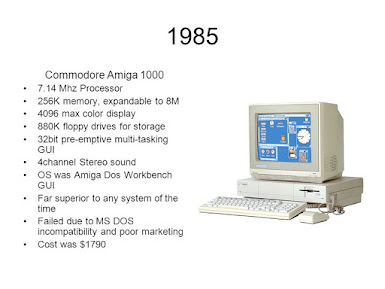 11. It may be hidden: AGENDA - "Gee, look at this lovely wooden horse the Greeks have brought us!"

12. More pinlike?: NEATER - More Saturday cluing as in "Neat as a pin"

13. Iconic New Yorker cartoonist Charles: ADDAMS - Of the TV show inspired by his ADDAMS Family cartoon series that started in 1938 he said, "I'm up and down about the show. They are only half as evil as my characters." 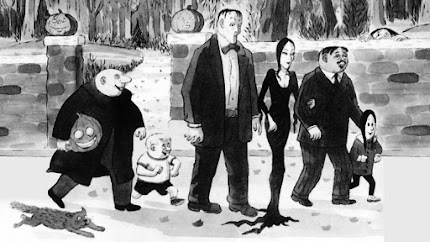 14. Linked by custom with: WED TO - Chas ADDAMS said he used the slinky woman he was WED TO as a model for Morticia

24. Squared stones: ASHLARS - I've seen them, admired them and even laid them but never knew what they were called. 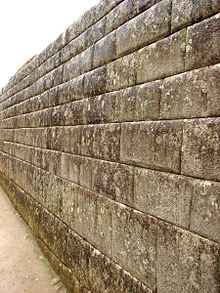 25. Divine type of rule: THEOCRATIC - Vatican City is too small to show up on the map. Clickable map of countries with THEOCRATIC rule 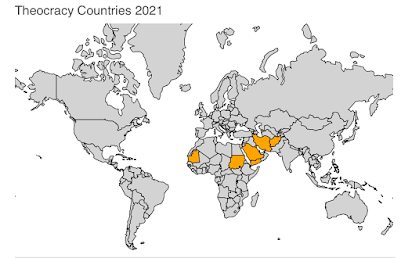 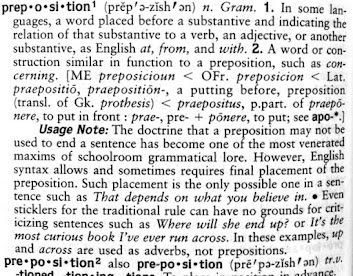 31. Country whose official language is Dutch: SURINAME - Another artifact of colonialism 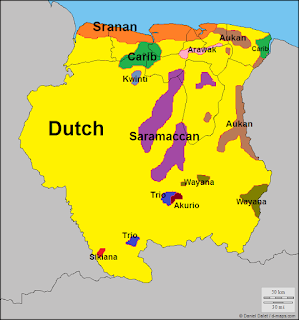 33. Song whose second line is "And I will pledge with mine": TO CELIA - First, I learn landscaping blocks are called ASHLARS and now I find out "Drink To Me Only With Thine Eyes" is actually is a line from a 17th century poem by Ben Johnson called TO CELIA.

34. Favorable: BENIGN - I would love to be in a more BENIGN climate in the winter

36. Dig with a snout: ROOTLE - And the learning keeps on coming. 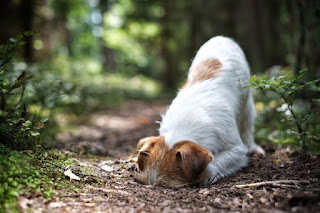 41. Flamingo, for one: HOTEL - Look carefully to see who was headlining there when this picture was taken 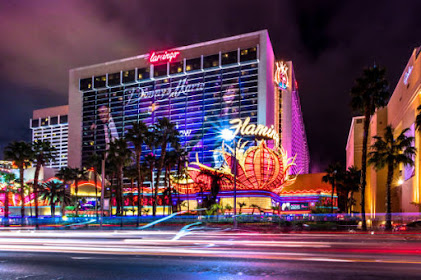 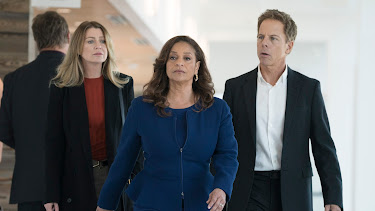 45. Not making any baskets, say: COLD - or not making any putts! Somedays the ball just will not go where you want it.

46. Lady of song: GAGA - Seen here as both a common and proper noun

48. When repeated, sound of impatience: TAP.