GilletteLabs released a new version of their heated razor, painted in the iconic blue, black, and red colors of the famous Bugatti hypercar. What cars and razors have in common, we’re not sure. But we know this bizarre mashup of brands yields a stellar shave, especially on chilly mornings. It’s the sort of extravagant gift a guy who shaves might not buy themselves, but it makes a great gift because it’s as close to a daily hot towel shave each morning as a busy schedule will allow.

While this second-generation GilletteLabs Heated Razor has a Bugatti paint job, forget about 0-60 mph times. Instead, focus on the fact that in a second or so it warms up to a toasty 122 degrees to give you a warm towel-like shave. And that, we'd argue, is far more useful than a 3 million dollar car.

Back in 2019 GilletteLabs, a new division within the shaving giant, released its first heated razor. The tool docks, vertically, on a magnetic base. You plug that base into the wall, set it next to the sink, and the razor charges the lithium-ion cell hidden inside the handle. That battery then sends energy to the gold-tinted stainless steel bar built into the five-bladed shaving cartridge. The handle warms the steel, and the metal warms your face as you shave. The experience is not exactly akin to a hot towel shave, but it’s a far more comfortable than a regular shave.

The razor uses proprietary cartridges that pivot left and right to follow the contours of your face. The gold-tinted stainless-steel band sits below the row of blades to warm your skin just before the cutting edges pass. That metal band has four sensors that dish out the heat. Controls on the handle adjust the temperature, from 109 to 122 degrees, which is plenty warm even on the coldest morning. And it gets hot fast — ready and warm in about a second. The razor is waterproof so you can take it into the shower and the handle holds enough power for about six shaves should you decide to stash the dock. In the hand, the razor has a nice heft to it that is weightier than a regular handle. While it’s not a hot towel shave — your entire beard and face are not turning supple with warmth — the GilletteLabs does provide a soothing sensation to the skin with each pull of the razor. The heating element warms your face, not the blade, but when you rinse the razor’s head under warm running water, it feels even better. This fancy razor doesn’t cut facial hair any better than a five-bladed Gillette that doesn’t have a dock, but it makes the experience better each and every time. 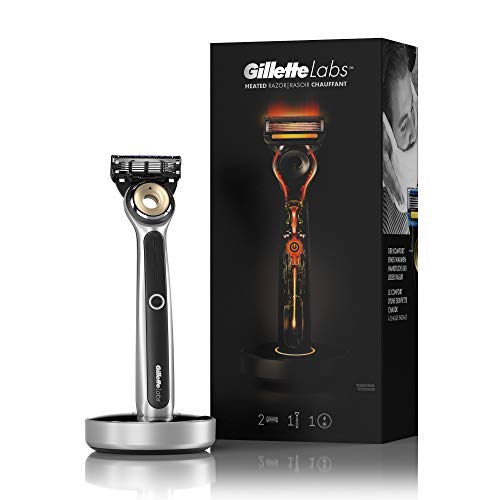 The standard version of the Heated Razor is $20 less than this latest iteration and works just as well.

Aside from the new color pattern, the Bugatti version is nearly identical to the first generation, which is about $20 cheaper. There’s a subscription service to refill the blades, which runs about $25 for a four-pack of blades. Is $20 worth it for a fancy blue color? Maybe. You might not care about Bugatti blue, but if you shave — or are doing some holiday shopping for someone who does — you should certainly care about making the routine more enjoyable. And as silly as this collaboration is, the tech in this razor delivers.

Every product on Fatherly is independently selected by our editors, writers, and experts. If you click a link on our site and buy something, we may earn an affiliate commission.

The post This $170 Heated Razor Is a Game Changer appeared first on Fatherly.